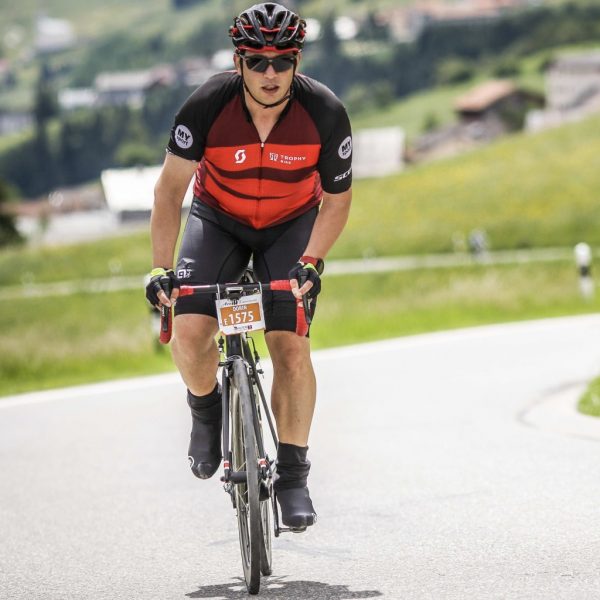 Two years ago when Dan suggested I should do the 3 Alpen Pässe, I thought he was joking. He wasn’t 🙂 He thought I should do them in 9-10 hours. I was almost 100kg and it was the first year I started cycling for more than the standard commute of 14km. I did then in 10hrs (including breaks). So the joy for climbing the alpine passes begun.

This year I won’t be able to do the Alpen Brevet. Due to traveling plans I searched alternatives. So the Alpen Challenge Lenzerheide came along. I was aiming for the long route, 190km with 4’473m climb. Longer than Alpen Brevet Gold route, but not as insane as the Platinum route). Compared with Alpen Brevet they have a time limit of 10hrs, with a time cut that directs you to the short version if you don’t pass one time checkpoint in a dedicated timeframe. Needless to say, I was up for the challenge. 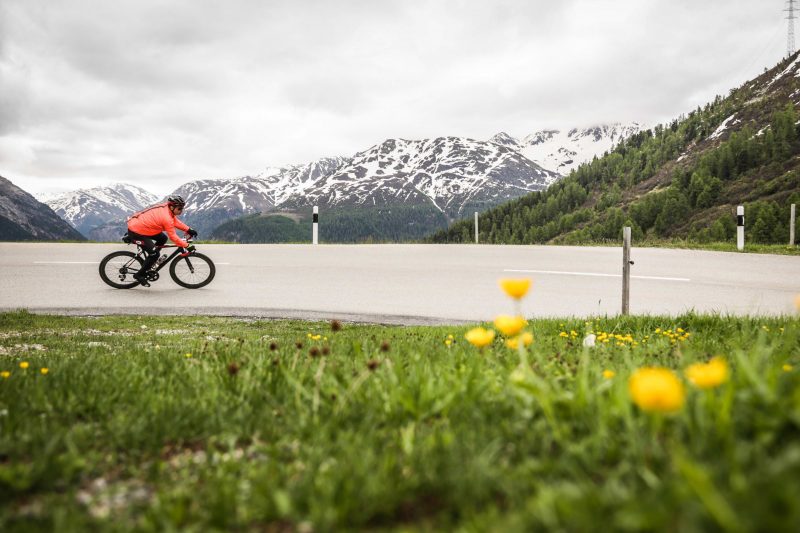 Two days before the start they announced that the long route is cancelled due a bridge being swept away at Splügenpass. So the short version, 117km with 2956hm was the only option with a time limit of 7hrs. Unfortunately they include the breaks in these 7 hours so I knew I need to step up the pace.

The start is in the morning at 7.00. All participants are organised on start blocks. I didn’t figure out how the split is done. I was rather nervous when I was in the last block E. So I passed the start just at 7.08, thinking I already lost precious 8min.

Learning from the previous week, when the Grimselpass opened (Highway to Heaven) I learned on the hard way the importance of layering. Put the clothes on once you need them! Don’t start at the bottom dressed for the 5 degrees up there. You will bake yourself. This is one of those things that make perfect sense yet you do it wrong once. This time I was ready with a jersey, elbow and knew warmers, rain jacket, rain booties cover. Thanks to the excellent offerings of Trophy Bike. Again I learned from a week ago, I put duck tape underneath the cycling shoes covering the wind to prevent feet from freezing. 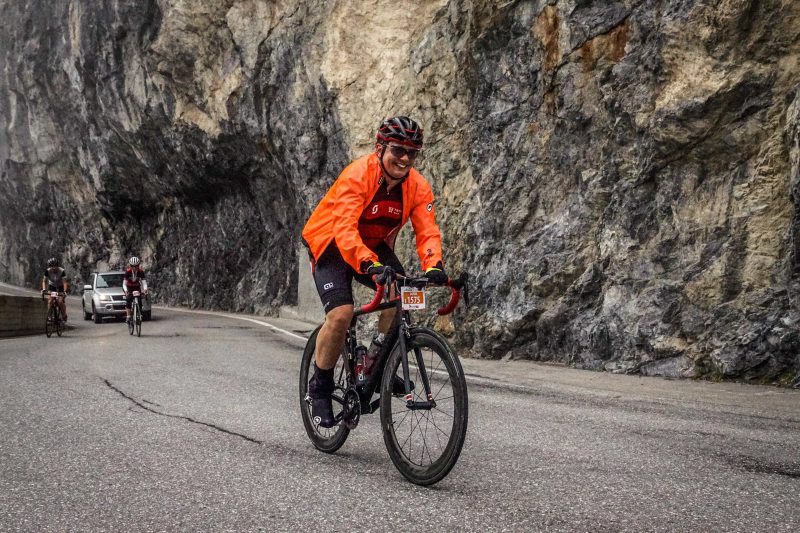 Focus on the power

Once we went down the valley you could see the destruction done by the recent floods. Little springs were respectable rivers. First part until Albulapass went very smooth. I was focusing not to exceed the power output. It is so easy to be taken by the excitement of the race and go faster, only to toast few hours later. It was quite frustrating in the beginning as I knew I can be faster. But I was set for once to listen to coach Dan Aeschlimann. About half way through I started to overtake other cyclists. Being confirmed for *-time Dan knows what he’s talking about. I kept the target overtaking more and more. 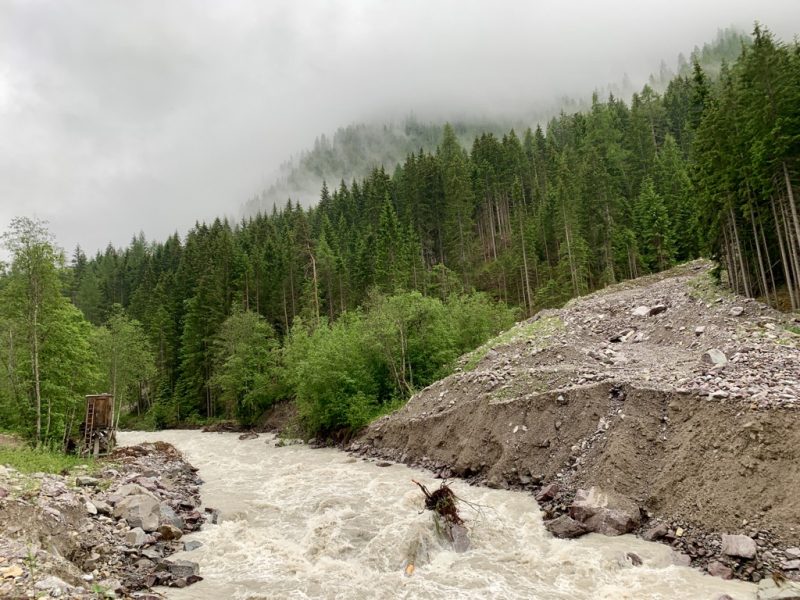 I was impressed by the presence of a barista at the feeding station. Maybe it was the body craving for it, but that espresso was a dam good one. The main food sponsor was PowerBar. I was super happy as I am used with their gels. So I didn’t cary too many with me as I knew I will refill at the station. They run out by the time I arrived. Not good as I relied on them and they had some weird fig cookies I wasn’t used too. But I still tried them. 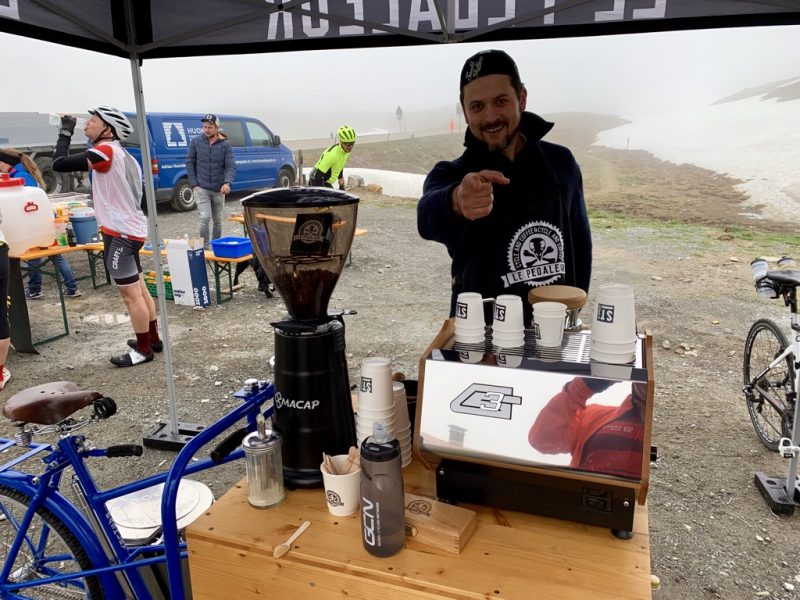 Once we finished the descent and cycled through the valley I was pleasantly surprised to see multiple groups riding in file, 10-15 riders. I always heard how much more efficient you are, saving 30% of your power. I thought it is a myth. In one moment I was focusing on the output and one group easily overtook me. I was curious and pushed to catch out with them.And oh my…suddenly I was at about 75% of the power target. So I was finding myself touching the breaks. Sweet, but solo riding was ruined for me… 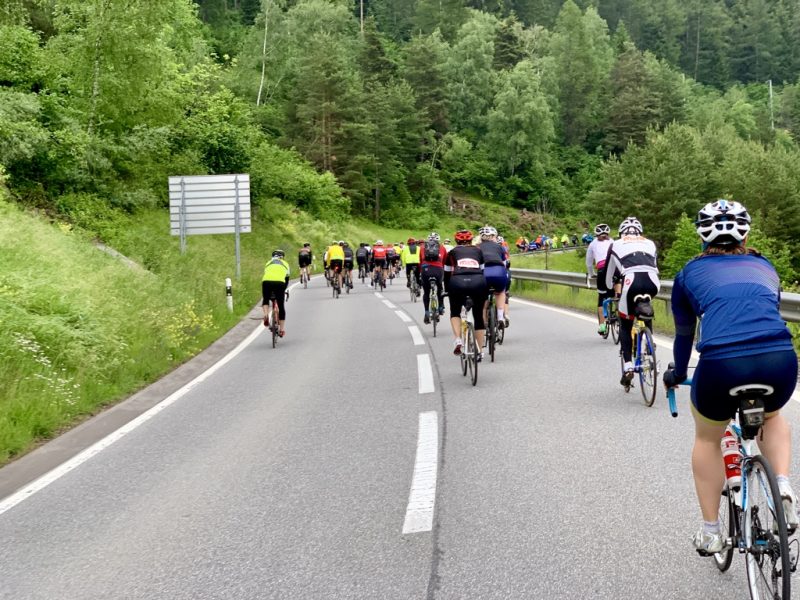 From St. Moritz the route splits into the long and short route. I was glad to see I had a good 45min until the time cut that would have allowed me to take the long route, next year. Pleasantly surprised, again barista and gels at the feeding station. I took 9 gels, yup. I got the look, put them into the soft flask. Happy I have the fuel to reach the 80carbs per hour and up the Julierpass. From here things started to get interesting. Traffic jams…hmmm, being on the bike I could over take them. I got lucky and even got a green light at the only traffic light (what?!). 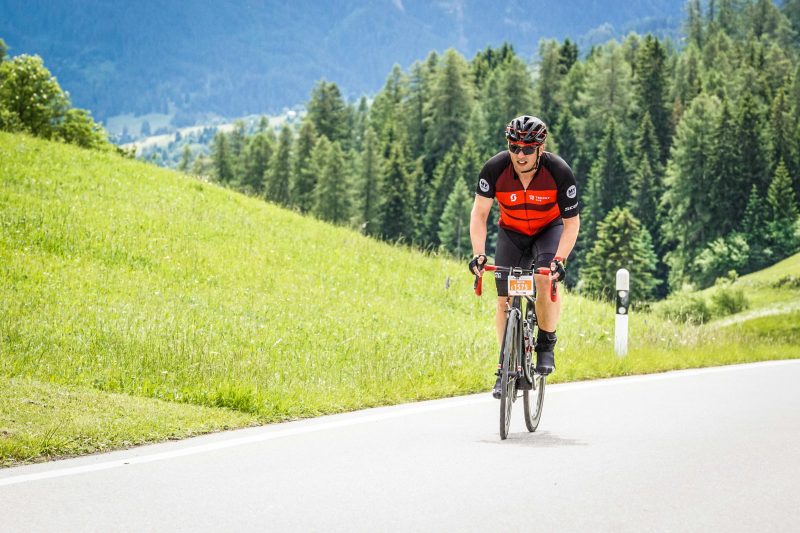 The descend from Julierpass to Tiefencastel was interesting. Bad roads, remember the recent floods? Lots of traffic lights. I got stoped to at least four times. Normally one wouldn’t care, but it is for sure frustrating when you are in a timed race. Started to get very annoyed when I noticed I still have 1hr till the time limit and 10km left with 600m climb. 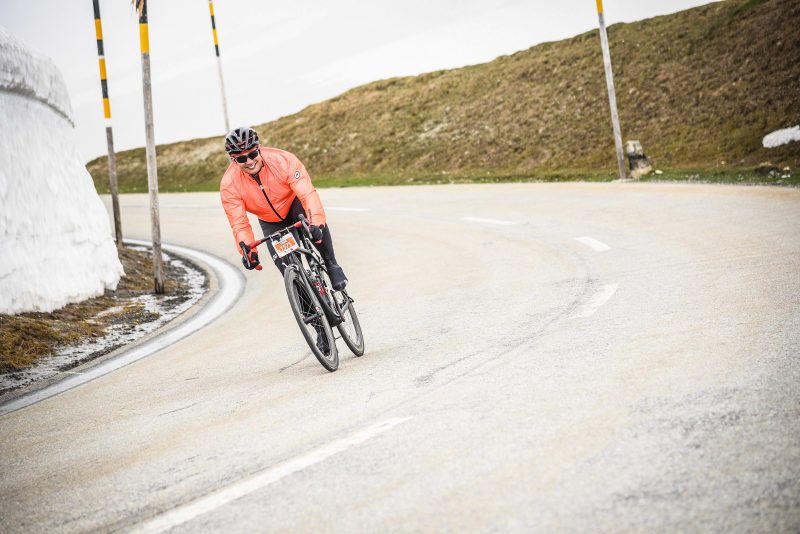 I knew I can do it, but still the prospect of not making it on time is rather daunting. The temperature in Tiefencastel was close to 30. From having 5 on top of Julierpass. I took the advantage at the last station to throw water on my head. Inclusive a tonic isotonic that the volunteer thought was just water, what a sticky mess. 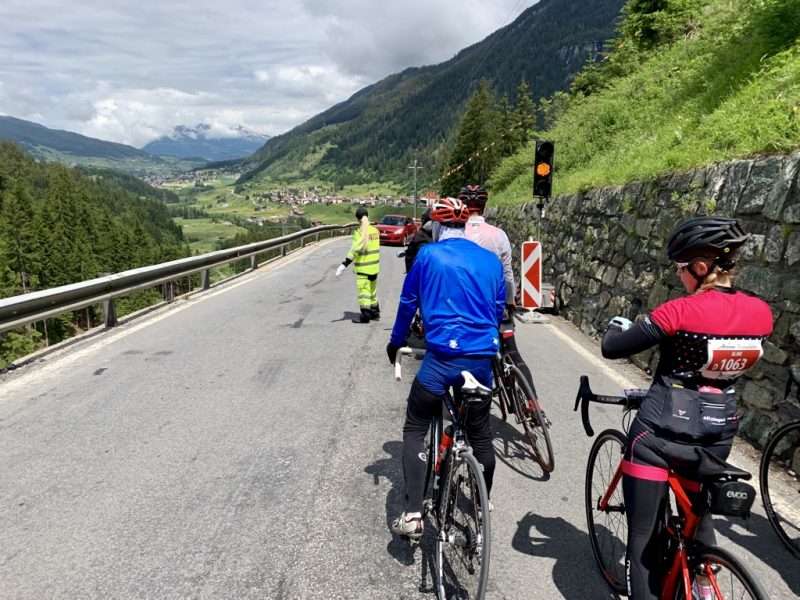 Will I make it?

As I only knew 14.00 is the absolute cut off and I didn’t know if the delayed start block will count, I started to work hard, counting, 2km-300m, I need 15min. I must not go below 9km/h but I’m not a sprinter. Sure I can do 250km rather easily in 9.5hrs. Yes I can keep that pace, but sprinting on the other hand, coupled with my weight, was not that easy. 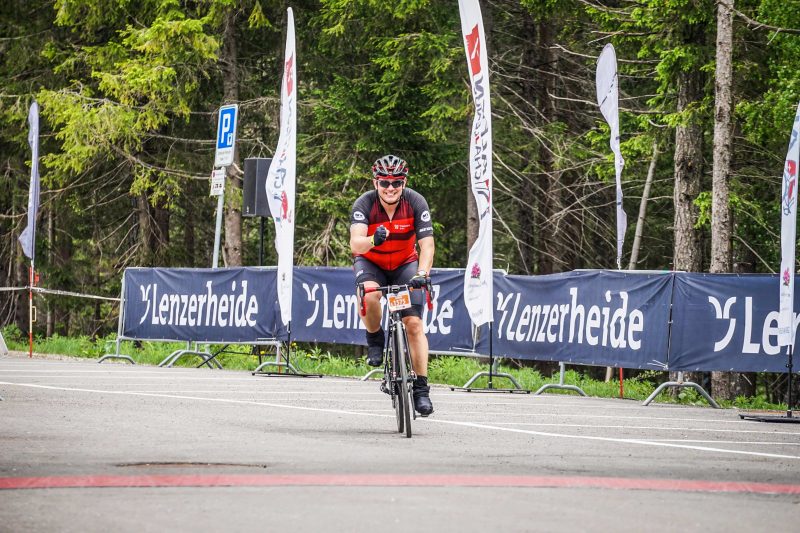 I was super happy when I crossed the finish line with generous 5 min to spare ?

Looking now backwards the Alpen Brevet Silver route is 9km longer with an additional 600m climb, I still improved by almost 3hours, and 13kg down the road. Next year will be the long route and I really must shed those 10kg Dan keeps on nagging me about, “you have a good engine but a the bad car body” he keeps on saying…I do see the benefits in it, as I cannot imagine for the life of me to do the same route with a 10kg backpack… 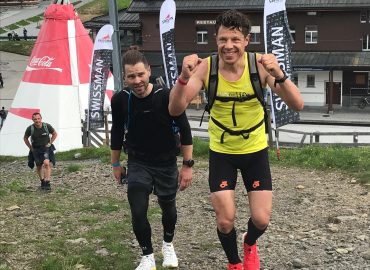 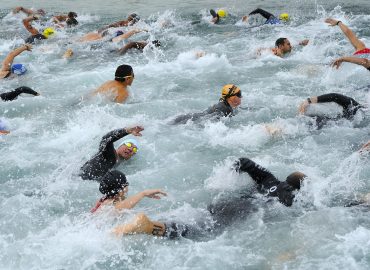 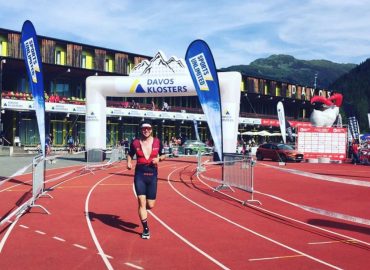